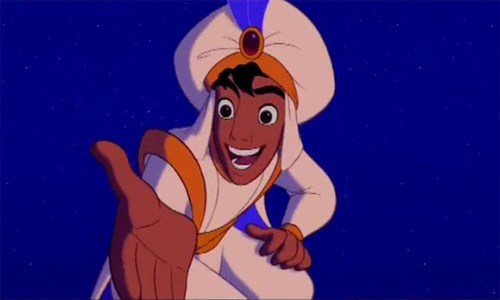 2 min read ⋅ Feb 28, 2013
A little faith
‘A Whole New World‘ is one of the few songs I know all the words to (including Jasmine’s part) which goes to show how much I respect Aladdin.  Spoiler alert (if you’ve lived in a TV-less cave for the past two decades): there’s a pivotal part in the movie where Aladdin sneaks up to Jasmine’s palace on his carpet and asks her to go for a ride.  She of course, hesitates (coyly), and then agrees to take a leap of faith.

During today’s “Engineering Empathy” workshop I said that one way I dealt with frustration was to have faith that everything would turn out alright.  ’Alright’ doesn’t necessarily mean ‘the way you wanted it to’.  It means a state better than the one you are currently in.  Who knows how that ride will turn out?  Even if you hit a few bumps, you will learn a few lessons along the way.

In some ways faith is stronger than knowledge.  Even though 1 + 1 may never be proven wrong (except in binary), I have no emotional attachment to it.  Its strength lies in its practicality and less so in its ability to inspire.  So have a little faith and be inspired by a new fantastic point of view.

David Wen
Entrepreneur, software developer, management consultant. He made his own alarm system for his room.Subscribe to his musings.
Read next
Energy
This morning felt a little off. I think it has to do with my breakfast. Each day, I have a breakfast of yogurt, with lots of berries, other fruits,...
2 min read ⋅ Feb 27, 2013