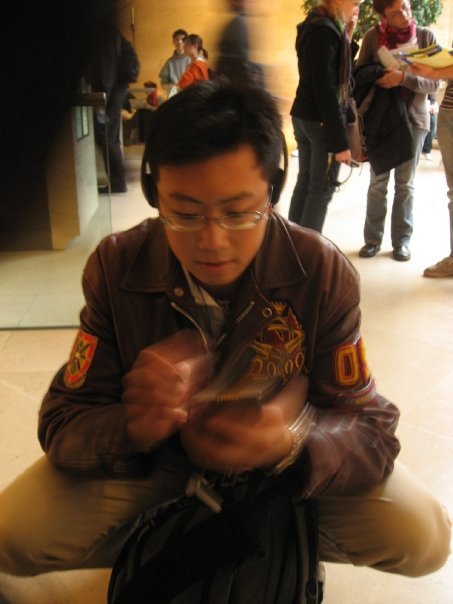 Founded in 1881, HEC also has many notable alumni, including three current French ministers, the director-general of the WTO, and the IMF president. In 2008, 9 CEO’s of Fortune Global 500 were alumni of the school.

I was lucky enough to go as an exchange student during the second semester of my third year at Queen’s University.

Picture is of me learning excitedly from the Musée du Louvre audio guide.

The HEC campus actually resembles Queen’s University quite a bit.  It’s located roughly 45min. outside of Paris by metro (closer to Versailles).  Almost all the students live on campus in residences.  The class sizes are small and you get to know your professors and peers really well.

Being a Grandes École (which literally means “elite school”) I was exposed to professors that not only knew their stuff, but also came from a variety of backgrounds.  From PhD’s in Germany to lawyers in the UK (Linklaters LLP) and from wine connoisseurs to the COO of Hermès, I received a truly elite education during my 4 months there.

As exemplified by the picture above, I made the most of my time in Paris and the rest of Europe.  Not only did I travel extensively, I also made sure I immersed myself in the French culture and saw first-hand what I had only read about previously in books or saw on television.  As well, just interacting with other international students from all over the world was an experience in itself.

Courses I took in English: Company Law, Negotiations, and Strategy

David Wen
Entrepreneur, software developer, management consultant. He has slept on the street in Tanzania before.Subscribe to his musings.
Read next
Media
Here are various points in time where I have been captured in the media or other publications.Nowadays people usually just Google people if they...
2 min read ⋅ About me: Education section