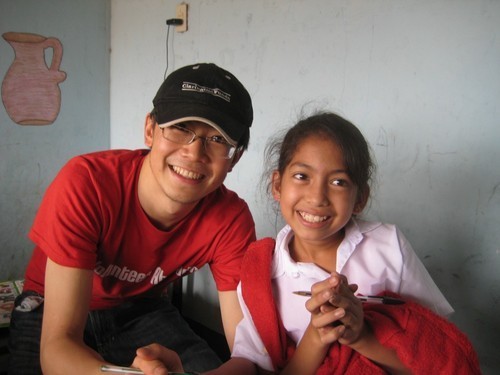 5 min read ⋅ About me: Philanthropy section
Philanthropy
Pictured: Me and a girl named Giselle in Diriamba, Nicaragua - teaching her English, math, and a trick you can do with your pen

Rider for the Ride to Conquer Cancer

A partner emailed me soon after I started at SECOR Consulting to see if I wanted to do this ride.  He thought I might be interested because I helped organize the United Way CN Tower climb for the company.  Slightly scared, I said sure.  I later realized there was a minimum fundraising requirement of $2,500 or they charge your credit card (which I had already given them!).  In the end, I was able to raise that amount and was one of 4,610 participants that raised a total of $17.5 million by cycling 200km/200miles in the fight to conquer cancer.  The ride was from downtown Toronto to Niagara Falls, and I completed it in just over 8 hours.

I trained hard for this ride, since I’ve never done anything like it before.  Of course, I was also motivated by my friend Andrew, who passed away from cancer in 2007.  I rode with his picture on my backpack and he was basically my sole companion the entire ride, since my colleagues were all much faster than I was…

Teacher, painter, friend at Nosotros Tambien Podemos (We Can Too)

In 2010, I volunteered at an orphanage for mentally and physically disabled children in Jinotepe, Nicaragua.  I worked with over 20 kids, helping them make crafts for their store, repaint their school, and generally played with them.  I especially liked the fact that the school taught its students skills that could help them earn an income, such as weaving or creating arts and crafts.  I remember watching in awe as a kid in a wheelchair with some sort of deformity in his wrist worked a loom-like machine making a hammock.  That hammock would sell for $20 USD at the school store.

Many people bought those hammocks, and it got me thinking of creating a website to help them sell their stuff. That was before I new how to code, but I was fairly good with WordPress and created an early mockup: www.wecantoo.org.  I hope one day to be able to help these types of charities all over the world sell their goods.

For two years, I headed up the Queen’s University chapter of Canada Millennium Scholarship Laureates.  There were more than 50 members in the group, and we ran events to raise money for local causes.  We also held networking events, and I managed a small annual budget of $2,000.  It was through this group that I would often come across other extremely philanthropic people and be inspired by their kind hearts.

QMC also ran the inaugural Time Auction which I have since spun off as its own separate entity.  I worked with an awesome executive team that put up with my whims and emails filled with awful jokes.

Cancer Triad is a small Queen’s club that helps people who are affected by cancer. The term “affected” doesn’t just mean people who have cancer – often times, it refers to people who have family or friends that have cancer, such as was the case for me (my best friend Andrew Chen died from olfactory neuroblastoma). My role as a volunteer and eventually a co-chair, was really just to make those people feel comfortable talking about their situation and to offer support or just an open and caring ear. This role really got me to be a listener and to really connect with and have empathy for others on an emotional level.

Mathbridge is a fun club that teaches math in interesting ways to local students in grade 2 or, in my case, grade 5. We would get about 2 hours every month or so to go in and engage the kids in games, activities, or puzzles to stimulate their interest in math. I’ve learned that kids are very eager, and will put their hands up for anything. I think fostering and sustaining that passion into their adolescent years would be something that is very good, though unfortunately rare, to see.

Volunteer at the Tai Dong Hospital

After my trip to Japan in 2003, I went back to Taiwan.  While I was there, I decided to visit an old neighbour of mine in Canada who helped start the Tai Dong Hospital in rural Taiwan.  There, I helped deliver meals and social services to needy aboriginals.  We also taught the locals English and played with the children.  I remember playing a basketball game with them, during which some of the kids said things like “eat his head!” which was apparently a throw-back to when the tribe was cannibalistic.  I also assisted in the hospital pharmacy and other random tasks that were required.

David Wen
Entrepreneur, software developer, management consultant. He can spin a book for a really long time.Subscribe to his musings.
Read next
Sports
White Rock Rockers SoftballI have been a part of this softball team since its inception in 1997 – indeed, I was one of the founders. Many of the...
4 min read ⋅ About me: Philanthropy section