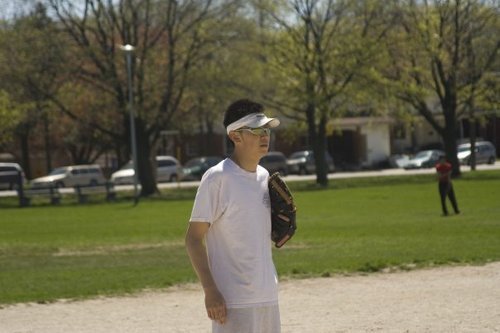 I have been a part of this softball team since its inception in 1997 – indeed, I was one of the founders.  Many of the team members have been on it since 1997 and many of them are still my closest friends to date.

As we got to the age where we can actually hit the ball somewhat hard, we began playing in tournaments.  Generally, we would come dead last because these were college and adult teams and we were a bunch of high school kids.  In 2004 however, we were able to squeeze in a silver medal finish to stun everyone.

Though I never played any sort of organized league basketball beyond grade 8, I still love to play pick-up basketball whenever I get a chance.  Often times, it’s at a friend’s house, the local school courts, or even sometimes on the streets in Taiwan where hundreds gather to play street ball.  I’m roughly 6’2″ (189 cm) so I must say I have a bit of an advantage in this sport – especially playing with my Asian friends :)

As mentioned in my Elgin Park section, I played lots of volleyball throughout my high school career.  When I arrived at Queen’s University, I still kept it up by playing on intramural teams, even once winning first place (after choking the year before and coming second…).  I played for Walkhome, which is a Queen’s service that I worked for, helping walk people home after it gets dark for their protection.

I’ve always played ping pong since I was a child.  We had a table in our garage and I would grab one of my family members or friends to play with me whenever I got a chance.  However, they weren’t always as interested in it as I was, so I often had to stand one half of the table up to make a wall, then play on half the table against that makeshift wall.  It’s actually pretty good training, and I got to be able to beat pretty much all my friends and family.

When I arrived at Queen’s, I wanted a ping pong challenge!  So I joined the table-tennis club and found some people that could absolutely destroy me.  When the club ended the next year, my friend Frank Wang and I decided to head up the club, and we became the co-presidents of the new table-tennis club (though by no means were we close to being the best).  That club is still alive and active today.

This is a very new sport for me.  In fact, previously, I hardly even considered it a sport.  However, I happened upon an opportunity to learn from a family friend for free and have been hooked on it since.  Now, in addition to pretending to pitch a baseball when I’m standing around doing nothing, I’ve added the occasional golf swing to make sure I look like a complete weirdo.

My future house will need to have the following: a kitchen counter that is height-adjustable, a secret button that, once pressed, reveals all my Nerf Guns by flipping around walls and paintings, and… a snooker table.

My friend Sam and I have kept up a tradition of playing snooker every week, even while we both were working long hours and I was actually working in another city.  We kept it up for over a year before I finally moved so far it became impossible…

Sam watches snooker and actually knows the rules, while I tend to break them and argue with him after.  We’re fairly evenly matched and we like to think we’ve improved over time.  The loser of each best-of-three round buys the winner a bubble tea.  For those who know snooker, 3 rounds can take a while (as with most British sports) but it was always a great way to end the week.  Nothing more satisfying than sinking a black with an authoritative sound and pretending it wasn’t an accident.

Other sports and activities that I partake in from time to time include biking, running, hiking, canoeing, and snowboarding.  I have also sky-dived, rappelled, and whitewater rafted before!

Rappelling in the Andes mountains, Argentina

David Wen
Entrepreneur, software developer, management consultant. He has slept on the street in Tanzania before.Subscribe to his musings.
Read next
Music
Violin / violaSoon after we moved to Canada, my parents took me to see an orchestra perform. After the concert, they asked me what instrument I...
6 min read ⋅ About me: Sports section