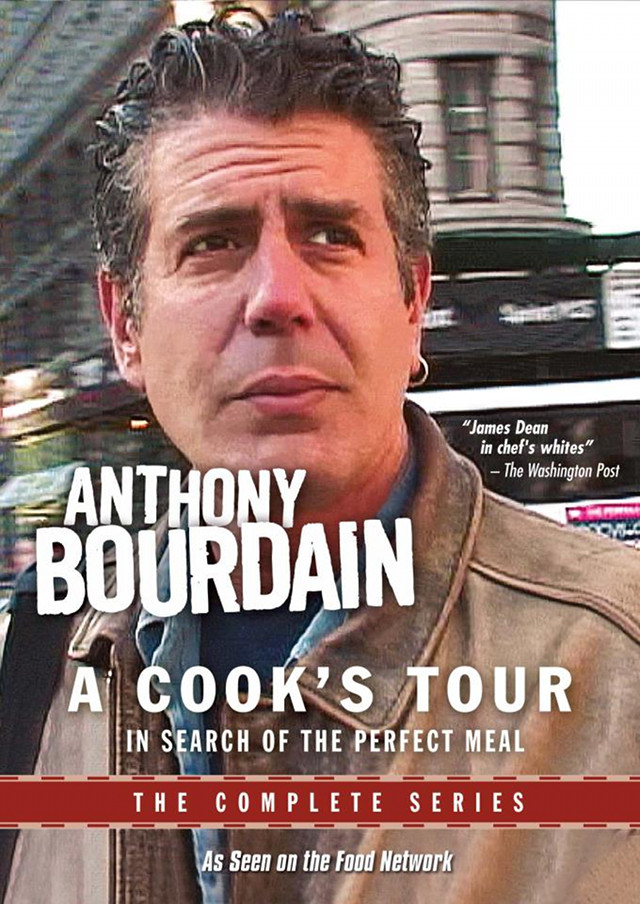 Travel. Eat wild stuff. Get paid. Good deal? Anthony Bourdain thought so, and off he went to Portugal, France, Vietnam, Russia, Morocco, Japan, Cambodia, Mexico, Spain, and the famous French Laundry restaurant in Napa Valley. Before you start drooling, know that some of the things he ate include: a beating cobra heart, bird nest soup, and a soft-boiled duck embryo with half formed bones and feathers. Given that, in an interview Bourdain once said the most disgusting thing he's ever eaten was... a chicken McNugget.

It helps that he was already quite famous when he made the trip. Special arrangements were always made for him to have really special stuff or dine at nice restaurants. In Portugal he was able to use his work connections and eat a freshly slaughtered pig with an entire village. In Mexico, he realized why all his colleagues were such good cooks. In Japan, he indulged in piece after piece of exquisite sushi (and sake) and at French Laundry, he felt awed and slightly ashamed at his own skills when compared to chef and owner, Thomas Keller.

The book is not entirely on food. In fact, in places like Cambodia, Bourdain blatantly says that the food there is mediocre and proceeds to comment on its poverty and how Nixon and Kissinger should be convicted as war criminals for their illegal bombing of neutral Cambodia during the Vietnam War. He also talks about the guilt he feels visiting Vietnam as an American and he is not shy about describing his emotions and reactions in as much detail as he does the hot bowls of pho in the morning.

Being an avid traveller myself, I usually stick to my Lonely Planet for food recommendations. Mostly for sanitary reasons. But then again, that's probably why nobody will ever ask me to make a TV show like this, so I better start expanding my comfort zone in food!