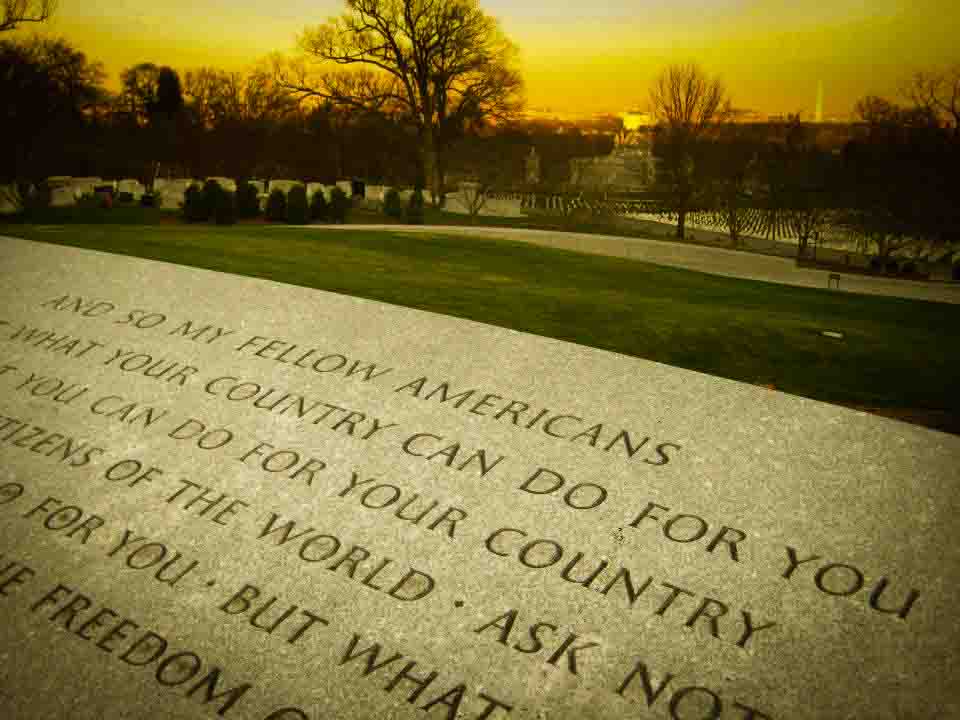 John F Kennedy's famous quote in Arlington Cemetary, Washington D.C.
Quotes and motivations
Adversity causes some to break; others to break records
- William A. Ward
Ships in a harbour are safe; but that's not what ships are built for
- John Augustus Shedd
It is wonderful how much may be done if we are always doing
- Thomas Jefferson
Worry is the misuse of imagination
- Dan Zadra
Leadership is doing what's right, even when nobody's looking
- George Van Valkenburg
Martin Luther King didn't say "I have a nightmare"
- Not sure...
You can't solve a problem with the same thinking that created it
- Albert Einstein
You can curse that roses have thorns or rejoice that thorns have roses
- Abraham Lincoln
If you think you're too small to make a difference, try sleeping with a mosquito.
- Dalai Lama
I learned that courage was not the absence of fear, but the triumph over it. The brave man is not he who does not feel afraid, but he who conquers that fear.
- Nelson Mandela
Life is not about finding yourself - it's about creating yourself
- George Bernard Shaw
Remember that failure is an event, not a person
- Zig Ziglar
If there is no price to be paid, it is also of no value
- Albert Einstein
If the path before you is clear, you're probably on someone else's.
- Joseph Campbell
If you're going through hell, keep going!
- Winston Churchill
Things are only impossible until they are not
- Jean-Luc Picard
Learning too soon our limitations, we never learn our powers
- Mignon McLaughlin
I skate to where the puck is going to be, not where it has been.
- Wayne Gretzky
Orville Wright didn't have a pilot's license
- Richard Tait
I have no special talent. I am only passionately curious.
- Albert Einstein
Our lives begin to end the day we become silent about things that matter
- Martin Luther King Jr.
Think everyday: just work hard for one day
- Japanese Proverb
Opportunities multiply as they are seized
- Sun Tzu
When you judge others, you do not define them, you define yourself
- Wayne Dyer
Pain is bread in French
- Frosh primer, Queen's University
It ain't braggin if you can do it
- Babe Ruth
L'habit ne fait pas le moine (the clothing doesn't make the monk)
- French proverb
Time wasted is existence, used is life
- Edward Young
A man who has nothing he is willing to die for has nothing worth living for
- Martin Luther King Jr.
Good writing is rewriting
- E.B. White
Do not fear mistakes - there are none
- Miles Davis
L'homme c'est rien - l'oeuvre c'est tout
- Gustave Flaubert to George Sand
Humility is a funny thing. When you think you have it, you've lost it.
- E. D. Hulse
Humility is not thinking less of yourself but thinking of yourself less
- C.S. Lewis
If you live each day as if it was your last, someday you'll most certainly be right
- Steve Jobs
The first and best victory is to conquer self. To be conquered by self is, of all things, the most shameful and vile.
- Plato
A state of chronic powerlessness eats away at a person
- Haruki Murakami
Leadership is an attitude before it is a role
- Back of some guy's shirt
Genius, billionaire, playboy, philanthropist
- Iron Man
Bill Gates and Warren Buffett both said 'focus' was the most important thing that got them to where they are
- Read this in a book
Joy in looking and comprehending is nature's most beautiful gift
- Albert Einstein
There has never been a statue erected to honour a critic
- Zig Ziglar

David Wen
Entrepreneur, software developer, management consultant. He was once addicted to Minesweepers (61 seconds on expert)Subscribe to his musings.
Read next
Meet me in Venice
It's a great feeling to have your book signed by the author - especially one you've gotten to know as a friend. I treasure my signed copy of "Going...
Author: Suzanne Ma ⋅ Review: 4 min read ⋅ Pages: 149 (100% read)