David Wen
Entrepreneur, software developer, management consultant. As a kid, he tried to train himself in the ways of the force.Subscribe to his musings. 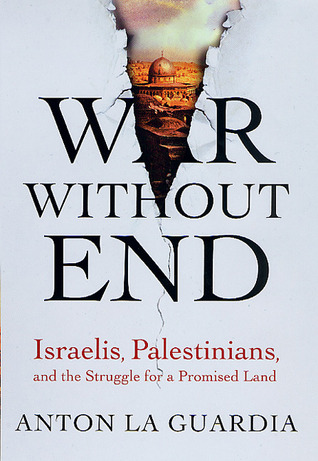 The struggles of the Israelis and Palestinians - with their terrible histories of disaster and redemption - command the obsessive attention of the world. Statesmen tinker with peace plans for the Middle East and generals worry about future wars there. Religious leaders stoke the violent passions of the devout while pilgrims flock to find God and archaeologists dig to find the origins of His revelations. All this goes on under the watchful eye of an army of reporters, observers, diplomatic envoys, and aid workers.

Between the Mediterranean and the Jordan River, dreams and ideals collide with the reality of violent nationalist struggle, and God's name is invoked in defense of the jealousies of men. With the experienced journalist's eye for irony, anecdote, and telling detail, Anton La Guardia offers an intimate look into the Israelis as they come to terms with the "post-Zionist" demolition of national myths, and the Palestinians as they try to build their own state. A classic in the making, War Without End is the definitive book on Israel and her people.

David Wen
Entrepreneur, software developer, management consultant. He once had to break into his own house.Subscribe to his musings.
Read next
The Prince
Here is the world's most famous master plan for seizing and holding power. Astonishing in its candor The Prince even today remains a disturbingly...
Author: Niccolò Machiavelli ⋅ Review: 1 min read ⋅ Pages: 166 (100% read)