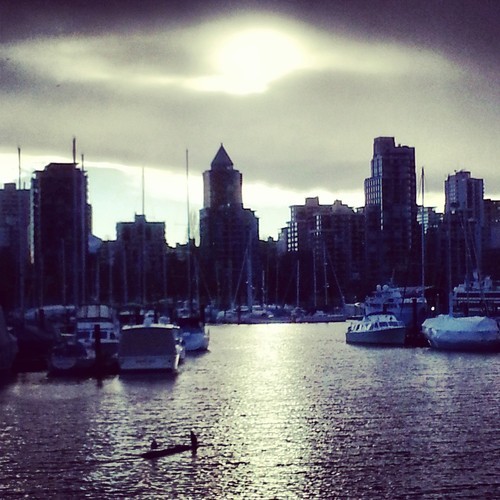 Since I’m heading off to Toronto soon to participate in The Next Founders program, I want to take some time and reflect on how beautiful my home for the last year is.

I live in Coal Harbour, which is right by Stanley Park, and is considered one of the nicer areas of downtown Vancouver. I can’t afford it, but luckily I’m renting from a family friend who can, and can afford to give me a steep discount.

From my window, I can see the Second Narrow’s Bridge in the distance, spanning an often glittering calm of water. In the summer, I often worked on the balcony with a cup of tea at hand. I had to reposition myself at various hours of the day to avoid the intense glare coming off of nearby condos - some of which were constructed at artsy, impractical angles, seemingly designed to blind balcony loungers such as myself.

A few steps from my condo is the actual harbour, where multi-storey yachts are covered up by tarps for most of the year. You can walk up and down the promenade and catch at least five different languages within 15 minutes. Though the area has many tourists, it doesn’t feel touristy. Locals jog and cycle along the waterfront and most of the benches are occupied by whispering couples, gossiping friends, or pensive souls staring at the mountains on the north shore.

There’s a community centre as well, where the studios have floor-to-ceiling windows. One can often see rows of adults doing yoga, girls doing ballet, or out-of-control kids running around in Taekwondo uniforms, kicking to their hearts content.

In the other direction, you have Stanley Park, where many people walk, bike, or rollerblade. The tall trees and greenery are a welcome respite from the glass and steel towers of the city. From the park, you can see the Vancouver skyline, the neat gas station in the middle of the water, and Canada Place, with its iconic white sails pointing towards the sky.

And that is but the surface of it all. I can recall fond memories at each of these places - memories which, if reflected upon years later, will still make me smile. What a lovely place. I feel so lucky.

David Wen
Entrepreneur, software developer, management consultant. He can spin a book for a really long time.Subscribe to his musings.
Read next
Do one more
What’s the last thing you want to do after 30 push-ups? One more push-up. Yet, that’s exactly how the RCMP trains its officers, and that’s how they...
3 min read ⋅ Mar 13, 2014