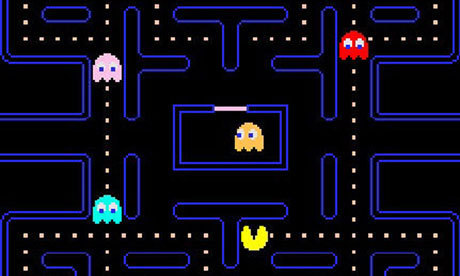 If I hear one more time, “You’ve gotta try In-N-Out Burger” I swear, I’ll go have an In-N-Out Burger (animal style).  So yes, after my dinner at a nearby pub with my fellow coders, I was convinced to go.  I had a double double and when it came and I saw how small it was, I added a milkshake and some fries.

Appetite, apparently, is influenced by more than just the quantity of food ingested.  If you’re prone to forget, then you’re likely to have forgotten you ate, and hence proceed to eat more.  That makes a lot more sense to me than the saying, “My eyes are bigger than my stomach.”  Unless you’re Mike.

Some might also say that if you’re being chased by ghosts, you’re probably going to eat more too.  I’d like to argue that in Pac Man, I live to eat, and the ghosts are merely minor hindrances.  At Dev Bootcamp, one might think that they’re only coding because they’re being chased by cute jujube-looking ghosts (called teachers? :P).  Au contraire, in order to survive – nay – in order to win, one must be bred to want to eat.  Your goal is to eat – not to run.  All the best players know that.  Appetite is to the stomach’s what ambition is to the brain.

I think sometimes life can look like a half eaten Pac Man game.  But if you’re driven enough, you’ll find your way to those stranded dots – even if it means starving for a bit or staying one step ahead of the ghosts.

David Wen
Entrepreneur, software developer, management consultant. He once rented an apartment for $67 a month, in Canada.Subscribe to his musings.
Read next
Bignum
Imagine a 2. Good job! Now imagine that same two with 170 zeros behind it. That’s bigger than a googol. That’s how many legal combinations there...
2 min read ⋅ Mar 06, 2013