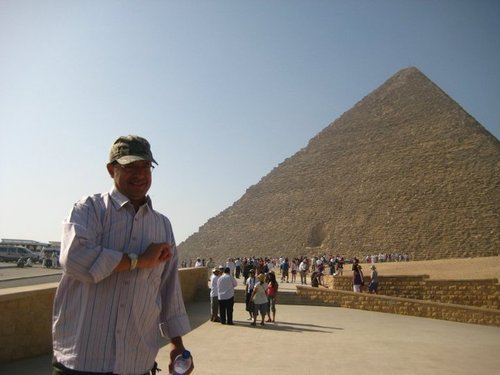 With all the media surrounding Egypt these days, I think back to when I first learned about Egypt’s history first hand at the National Egyptian Museum in Cairo.  There, a friendly tour guide named Karim offered his services, as well as his phonetic way to say complicated Egyptian names – like “Hot Chicken Soup” for Hatshepsut.

At first, Karim talked really really fast.  He was really excited to be telling us about Egypt’s history.  My friends and I gazed at him with empty looks while he pointed this way and that, at pyramid tops and canopic jars, all the while mimicking the way Rameses would have walked 4,000 years ago.

Sure, he tried to over charge us at the start.  Sure, he bribed a guard here and there (and everywhere).  Sure, he led us into forbidden areas (and then bribed the guard that turned a blind eye).  But after awhile, Karim grew on us, and we were sad to part with him.  And it is sad today to see Tahrir Square in such mayhem – mere steps away from where we met our favourite Egyptian.  If only people were there six months ago, they would have met the friendly German-English speaking tour guide who, if in the right mood, would treat everyone to drinks while telling us to “have a look” at some undiscovered Egyptian treasure only he knew.

Hatshepsut may have been one of the most influential pharaohs of all time – but I don’t need a mnemonic device to remember Karim.  Ask a guard for him if you’re ever in Egpyt – they will for sure know who he is!

David Wen
Entrepreneur, software developer, management consultant. He double knots his shoelaces.Subscribe to his musings.
Read next
What if the world was blind?
Most people know Helen Keller, the deafblind American author, activist, and lecturer. There’s a famous story about her, where her teacher, Anne...
2 min read ⋅ Jan 30, 2011