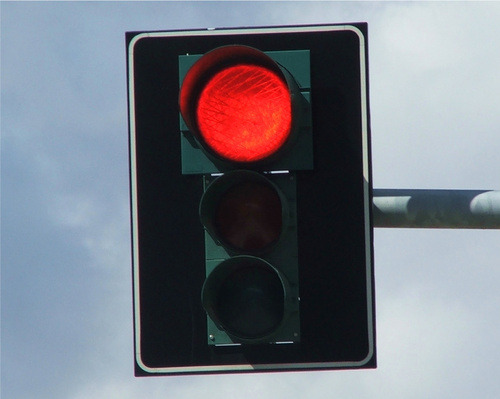 I watched in horror as the cyclist in front of me cycled into a red light.  Sure, he was checking left and right, but why take the risk?  How much time does this guy actually save - and at what risk to himself?

I must say, I’m not a perfect cyclist myself.  The only time I’ve ever been pulled over was on my bike.  There was a four-way red light for pedestrian-only crossing and I plowed right through it on my bike thinking I’m just a dude on a bike, who am I going to hurt?  A few seconds later a cop turns on the siren (overkill?) and waves me to the side.  He asks for my driver license (are cyclists supposed to have one?!  What if I’m 12 years old?) and proceeds to run it through the database of badasses.  In fact, he actually said to me, “So am I gonna find out that you’re a badass?”  He said it in a joking tone, probably because I don’t look like a criminal, with my glasses and helmet.  He gives me a warning and a message that “he often picks cyclists off the pavement in pieces” so i should be more careful.  Duly noted.

So, when I saw the guy in front of me do this, I know what he’s thinking.  I’ve been there myself.  I can see the pedestrian countdown almost at 0, and there are no cars in sight.  He had just pulled up, so it’d be annoying to stop and start again (even though he’s not wearing clip-on shoes).  It’s very tempting to save the 3 seconds plus the 2 second delay before red lights turn green.  A few seconds saved here could mean that you beat the next light, and the next, and ad infinitum until you have so much time you don’t know what to do with it.

Often someone sneaks a trick like this ahead of me and I take my time, only to catch up with them anyways at the next light.  But let’s say you are able to succeed 4 times in a given ride, and you save 30 seconds each time.  Would you trade 2 minutes for a chance you’ll get hit by a car?  No thanks.  The same goes for speeding when you’re driving.  Going 120km/h versus 100km/h is 20% faster.  But unless you’re driving long distances, the earnings don’t amount to much.  For a typical 50km commute, you’ll get there in 25 minutes versus 30 minutes.  And a car is arguably more dangerous - both in terms of harming yourself and harming others.  Is 5 minutes worth it?

Stay safe.  Your healthy body will thank you for not trying to squeeze an extra few minutes out of the day.  Watch one less YouTube video or something.

David Wen
Entrepreneur, software developer, management consultant. He was once pulled over on his bike.Subscribe to his musings.
Read next
Tutti
I’ve recently started a new String Trio (violin, viola, cello), tentatively called the Marcato String Trio. Today is our first practice and we...
2 min read ⋅ Nov 25, 2013