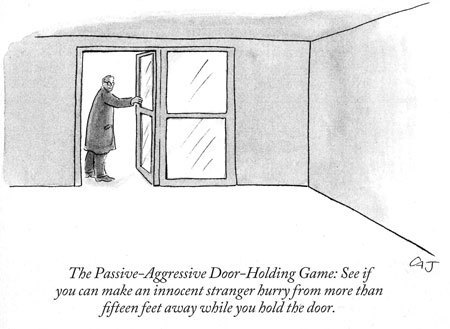 You hear the footsteps quickening behind you and you steal a glance over your shoulder.  You determine there to be a four-second differential between you and her.  The door is ahead of you.  What do you do?

A: Keep the door open for her

She says thank you!  You feel like prince charming.

She’s too far away, and starts running.  She might have lots of things in her hands, or be wearing heels.  It’s awkward, because the door is actually kinda heavy, you’re actually not too strong, and you’re pushing the door too close to the hinge, making it even harder.  She gets there panting and mutters a barely audible, “Thanks.” before readjusting her hair, putting her stuff back in order, and checking her phone.

She keeps walking at the same pace while you struggle to keep the door open.  You actually have to step back out and keep the door open while she waltzes by, keeping the same deliberate pace.  She doesn’t say anything because, well, chivalry is expected, not something to be thankful for.  You swear you’ll never open the door for anyone ever again.

She walks through, either with scenario 1, 2, or 3, and before you have time to close the door more people start walking through, something thanking you and others not.  You then have to force on a smile while each passing person makes you that much later for wherever it was you were going.

B: Don’t keep the door open

No matter what, nobody will thank you.  People will judge you.  Especially if the person behind you was a lady, and you’re a guy.  More people start touting that chivalry is dead and that girls should throw rocks at boys.  One plus is that you will be a few steps quicker getting to work, the ice cream truck, or somewhere so important that it can’t wait 5 seconds.  Another plus is that, since the door’s closed, so you won’t hear their tsk-tsk’s or feel their glares on your back.

If you judge that the person behind you is walking at an arrogantly slow pace, or that she is followed by lots of people, quickly pass through the door and don’t even attempt to keep it open for any longer than it takes for you to slip through.  Otherwise, smile, and help someone out :)  It’s empirically proven (by my arbitrary points) to make you relatively happier than the alternative.

David Wen
Entrepreneur, software developer, management consultant. He once had to break into his own house.Subscribe to his musings.
Read next
Hot chicken soup
I’ll never forget Hatshepsut.With all the media surrounding Egypt these days, I think back to when I first learned about Egypt’s history first hand...
2 min read ⋅ Feb 03, 2011