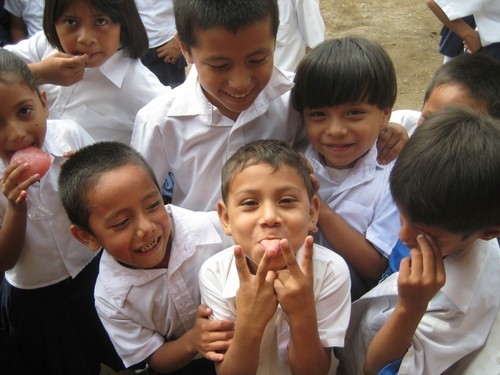 It’s been a month since I’ve returned from Nicaragua and Costa Rica and I’ve finally gotten around to reflecting on it.  Ok, that’s a lie, I’ve been constantly reflecting on it.  What I meant was, I have finally organized my thoughts enough that I’m willing to post about it.

To sum it up my experiences, I’ve written a short story.  Here’s a written trailer (or whatever the equivalent in short story world is called):

Character 1: “We only have one week to paint this school, and even if we do, what difference does it make?!”  Character 1 throws his scraper against the wall in frustration.

Character 2: “Sometimes the difference cannot be observed by the eye, but by the heart.”  Character 1 looks like he just had an epiphany.

Character 3: “Which is your favourite picture?”

[Black screen, music intensifies, white text reads, “A story about volunteers from a world away…”]

[Black screen, music climaxes and stops.  White text reads, “Who made a world a difference.  On the web at www.justsaywen.com/creative-writing Spring of 2010 (i.e. now)”]

The story isn’t that cheesy (I hope).  In fact, it’s a bit disheartening.  Basically, after the trip, I felt that most of the things we were trying to do would hardly make a material difference – painting the walls, teaching lessons, playing with the kids.  However, the real difference was when the kids felt proud to go to school, gave you a high five when they were able to paint something they didn’t think they could, or laughed when you made a funny face.  Sometimes, it’s the immaterial things that seem to last the longest and create the greatest legacies.

The story is here, under the Creative Writing section of my website.

David Wen
Entrepreneur, software developer, management consultant. He started his first business when he was 15.Subscribe to his musings.
Read next
My True Colours
What colour is that truck? What colour is my shirt? What colour is [insert random coloured item within sight of the curious protagonist]?That’s...
2 min read ⋅ Jan 29, 2010