David Wen
Entrepreneur, software developer, management consultant. He used to make his own POG slammers.Subscribe to his musings. 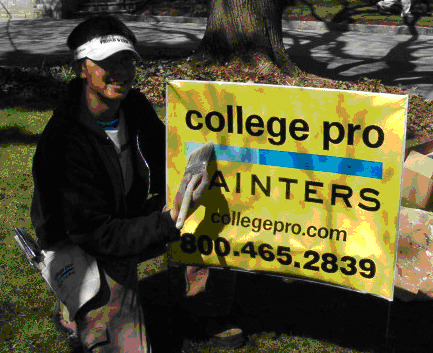 This famous franchise recruits college students and trains them on how to paint houses.  I had never painted before in my life, but the idea of running my own business seemed much better than any other first year university summer job.  I ended up as the top rookie in Ontario (and second in Canada) with $140,000 in revenues and $42,000 in profit in one summer.  I was also running the largest turf in all of Toronto, as I started to take over other franchisees that were not doing as well, ending up with five different turfs.

I worked from October 2005 until the end of August, 2006.  From October to December was pretty much full-out training by College Pro Painters, the franchise company.  They taught us how to estimate how much it would cost to paint a house, how to find customers, and how to hire painters.  We had set our goals early and worked back how many cold-calls we needed to make every single week in order to make our goals.

I set a goal of $40,000 in profits, which was very substantial.  But my general manager, Ashley Ward, was very encouraging and motivated me to keep on track.  I remember that Christmas, while it was snowing hard in Toronto, I was already going around and knocking on doors, asking people if they would like advanced estimates on painting their houses.  The average cold-call leads per hour is about 1.  The first night I went out, I got 11.

During second semester, I would drive up to Toronto from Kingston (where Queen’s University is) every weekend to book jobs.  I drove in the first car that I bought – a ’93 Voyager, which died pretty much the day summer was over (it drove over 210,000 kms.  I still have the back seats :)).

Slowly but surely, I started amassing sales, but that didn’t come without hard work.  Every Tuesday and Thursday evening I would sit in my room and call potential clients for 3 hours each night, booking estimates.  Then that weekend I would drive to Toronto and actually do those estimates, usually 5 or 6 per day for 2 hours each (I eventually got faster at doing them, down to 1-1.5 hours).  I figured much of it was a volumes game – the more I tried, the more I was bound to get.  Before I even painted my first house, I already had $63,000 in jobs booked.

Having large aspirations meant having a large team and large equipment.  My team was at one point up to 15 painters split into 5 work crews, meaning I could paint 5 houses on any given day.  I even had one of the few 40-foot ladders in Toronto.  In case you’re curious, 40-foot ladders can reach about 3.5 stories.

The first few houses were intimidating, and I often lost money on them because I had to go overtime to make sure I did the job right.  Eventually though, we got into a rhythm and would be able to finish before the stated completion date I gave the customer.  Even my sales pitch got into a rhythm, as I would walk them around the house, talk to the home-owners in detail about what we were going to do, and write up a detailed and organized contract for them to review.  As summer went on, we got more and more referrals from people seeing us work, and the summer went by in the blink of an eye.

That summer didn’t just push me outside my comfort zone – it catapulted me outside of it.  I was living and working in Toronto, which I had never done before, and running my own business, making sales worth thousands of dollars each.  This experience really taught me the value of organization, careful analysis, and what it means to be responsible for your actions.

With so much going on in a business, things can be easily missed, and when things go wrong, the buck stops with you, and you have to deal with it.  I remember having to deal with clients who thought they didn’t get what they paid for and painters who were depending on me booking jobs so that they can pay their tuition.  That’s a lot of responsibility and if I wasn’t organized enough or didn’t plan ahead, I would have let a lot of people down – never mind myself.  It was definitely a worthwhile experience and one that I will not forget.

David Wen
Entrepreneur, software developer, management consultant. He has built his own two-storey treehouse.Subscribe to his musings.
Read next
IYA
My first business ever was taking care of people’s homes for them when they went away. Hence IYA - “If You’re Away”. We then used the IYA brand for...
4 min read